In partnership with Mad Gael Productions and The Kissers, Madison Music Foundry is starting a new youth performance group, The Young Celts.

*Rehearsals will take place on either Saturday or Sunday. The exact time and day will be based on members' availability. 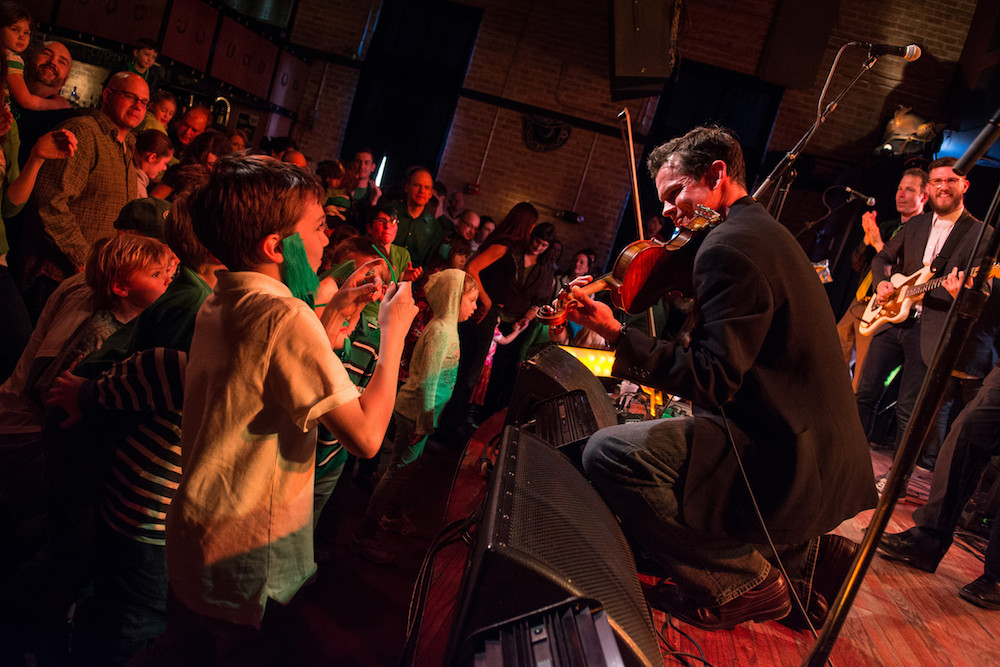 DESCRIPTION
Rehearse with 1-2 instructors for eight weeks, learn songs and tunes in the Celtic genre, and play two gigs--one at the Memorial Union as part of the Madison Celtic Festival and another opening for The Kissers on St. Patrick's Day!

ELIGIBILITY
Age: High school
Level: Intermediate to advanced
Audition: All participants must pass an audition. Previous experience playing Celtic music is a plus, but is not required.

STRUCTURE
Rehearsals are two hours and last eight weeks. There will sometimes be two coaches. There will be a main coach plus a revolving cast of assistants who specialize in different instruments. Towards the end of the session, there will be a special mentoring session with The Kissers.

CURRICULUM
This group is geared towards intermediate to advanced players who already have a strong facility on their instrument. The instrumentation is not specifically defined (see “Instrumentation” below) and is more based on the ability of the student. We will conduct auditions to determine whether a student is ready for this group as well as to gain a better understanding of what tunes and songs will be appropriate.

Rehearsal time will be spent learning how to play as a band and so won’t be heavily focused on individuals learning their parts. That time is expected to be spent between rehearsals and preferably supported through private instruction. In this class students will learn skills particular to performing in a group setting such as creative decision making, listening, and arranging.

The Celtic repertoire is vast and varied, and so the musical selections will be influenced by the experience and interests of the members. Whenever possible coach and students will collaborate to select and arrange appropriate material. Students will receive some material to work on prior to the first rehearsal.

INSTRUMENTATION
While traditional Celtic music has a somewhat definable list of common instruments, some contemporary styles such as Celtic rock have a wider range of options. In addition to the more standard instruments such as voice, fiddle, tin whistle, flute, mandolin, tenor banjo, accordion, pipes, acoustic guitar, and bodhran are the less traditional electric bass, cello, drum set, stomp box, and “you name it, it’s probably been tried.” Therefore we are most interested in students who can demonstrate an ability on their instrument and are excited about the style. If you’re unsure of whether your instrument is appropriate for The Young Celts, please contact us.

GIG
As with all of our Performance Group offerings, the Young Celts session ends with a gig. Through our partnership with Mad Gael Productions, we are offering a slot at the Madison Celtic Festival on Mar. 9 at the Memorial Union plus a second gig opening for The Kissers on St. Patrick’s Day (Mar. 17) at the High Noon Saloon.

AUDITION
For the audition we’d like to hear at least two songs per instrument. In the Celtic style is preferred but not required. We may ask a few additional questions regarding your experience or interests. It will not take more than 20 minutes.

Auditions will take place on December 2 from 12-5pm. If you are unable to make that date, then please let us know so that we can schedule something before then. Feel free to contact us if you have questions about the audition.

MEET THE COACHES
(more to come!)

Ken started playing bass when he was 13 and went on to earn a Bachelor of Music in Bass Performance from UW-Madison studying under jazz great Richard Davis (Miles Davis, Bruce Springsteen, Sarah Vaughn). After college he played in many bands and toured extensively with Madison-based Irish rockers The Kissers who performed over 1,000 shows in 39 states across the U.S. during the mid-2000s. The Kissers were voted Madison's Favorite Local Band six times by the Isthmus Readers Poll and received awards for Best Rock Album (Live Candy Ratz, 2009) and Best World Album (Three Sails, 2015) from the Madison Area Music Association Awards.

Ken has been teaching private bass lessons since 1996 and has helped students successfully audition into Wisconsin Youth Symphony Orchestra (WYSO), WSMA Honors Orchestra, and various university music schools and conservatories. Many have gone on to tour in bands, play in professional orchestras and even to teach lessons. He also helped establish Madison Music Foundry’s flagship program Rock Workshop in 2008.

In 2010 Ken completed an MBA in Arts Administration from UW-Madison and shortly thereafter became the Education Director of Madison Music Foundry. He his happy to combine his real life experience of being a full-time musician with the management skills he learned in his graduate work to help Madison Music Foundry offer the best in music education.

Jon is a violinist in the Madison Symphony Orchestra where he has worked with Pulitzer Prize-winning composer Gunther Schuller. He studied at the Berklee College of Music with Matt Glaser and received his Bachelor of Music degree from UW-Madison. Jon has soloed with the Smithsonian Jazz Masterworks Orchestra and has been featured with violin legends Johnny Frigo and Johnny Gimble. He has performed on promotional recordings for Lands End and Miller Brewing and can be heard on albums by Willy Porter, Freedy Johnston and Garbage. In his movie soundtrack debut, Jon played on “Al Otro Lado del Rio” from The Motorcycle Diaries, which won the Academy Award for Best Original Song in 2005. Jon has been a membe of Madison's Celtic band The Kissers since 2012.

Jon teaches lessons on violin and viola. Additionally, he has coached Bluegrass Workshop and the Folk Ensemble at Madison Music Foundry. He has also been a Solo and Ensemble judge and a clinician at numerous schools and string festival and spent a semester teaching string improvisation at Wichita State University.